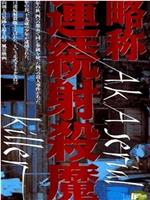 A horrifying series of murders, committed by a teenaged killer in 1968, prompted a group of filmmakers to chart his path, capturing the things he might have seen before committing his crimes. Their result is this provocative, rarely-screened meditation on geography and society.  In 1969, Adachi, who had already made a number of important films, led a group of people, who were al...