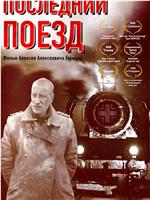 "Aleksei Gherman junior’s film The Last Train premiered in Moscow in mid December during the film festival Stalker, which also awarded it the prize for the best film. However, its first screening had already taken place in the ‘controcorrente’ competition of the Venice Film Festival in September. The film, dealing with theme of war and shot in black and white, remained unnotice...